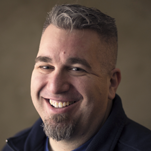 Former Marine sergeant, Thomas “Blixtev” Blair has been designing and building online worlds for over 14 years. In that time, he shipped two expansions as a designer on EverQuest (Planes of Power and Legacy of Ykesha). He transitioned to the Star Wars Galaxies team during the implementation of Jump to Lightspeed and remained through two more expansions, eventually becoming lead designer. Post Galaxies, he led the DC Universe Online team as lead systems designer while building the initial launch game. Blair is a very “technical” designer, getting his hands dirty in the underlying systems that make MMOs work. He’s listed as the inventor on two patents for work on Star Wars Galaxies, specifically the Beastmaster system and the Entertainer “Build-a-Buff” system.